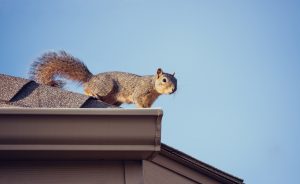 The Gray Squirrel rivals the raccoon for the total number of nuisance complaints per year. There are several reasons why they are such a common nuisance. Squirrels are very creative and agile. These abilities enable them to access food from bird feeders and garbage cans. They are just as creative when it comes to finding places to live. Under natural circumstances squirrels live in hollow trees or leafy nests they create in the upper branches of trees. These nests are sloppy in appearance and are generally quite large, in contrast to the small neat nests of birds. Squirrels will generally nest in the type of trees that also produce the seeds that they eat Oak, Hickory, Maple, etc.  Animal Control Specialists, Inc specializes in nuisance squirrel removal.

The primary species of squirrels that are indigenous to our area of Illinois are the Eastern Gray & Eastern Fox Squirrels. Of these, the gray squirrel exists in greater numbers. Increasingly common are black squirrels which are a melanistic color difference of the gray squirrel. The Fox Squirrel is generally larger then their gray cousins and are characterized by their red/ orange color.

Squirrels will make themselves at home in places where they shouldn’t. They frequently substitute attics, soffits, sheds, garages and chimneys for the more natural trees. Not only do they take up residence in our structures but they thrive there. Our structures provide shelter from the elements of weather and protection from predators. The abundance of resources, food and shelter, provide the ideal conditions for population increases. This higher density of squirrel numbers leads to more nuisance complaints and phone calls for squirrel removal.
▪ Squirrels in Attics
▪ Squirrels in Chimneys
▪ Squirrel Nest Problems
▪ Squirrel Damage From Gnawing

Do you have squirrels in your BBQ grill?

Squirrels will build nests in some odd and wonderful places. We have seen them in BBQ grills, planters, between storm windows, watering cans, car engines, stored boats and almost any place that provides protection. One of the most dangerous places that we see nests is around electric motors. The nesting stops the movement of the motor which overheats and potentially ignites the leaves, sticks and other debris. We often see this problem when home owners screen their own attic fans from inside the attic. This method will keep squirrels out of the attic if done with strong materials. However it can create a worse problem. Animal Control Specialists, Inc. screens attic fans from the exterior to prevent this from happening.

We have found that when faced with a squirrel nest removal it is best to capture the adult female prior to disturbing the nest. It becomes difficult to impossible to get a squirrel to enter a trap when it is frantically searching for its young. In fact mother squirrels are so protective we have had squirrels come directly to us if they hear the high pitched squeal from one of their young.

Squirrels are a member of the rodent family. All species of rodents need to continually wear down there front incisor teeth because constantly grow. This results in the gnawing behavior that is seen in squirrels. There are other reasons that squirrel cause damage by gnawing also. These include the shredding of objects for nesting material, the creation of holes in structures to gain entry for den sites and damage done when trying to get out of a situation that they have fallen into. Some of the common damage that Animal Control Specialists, Inc. commonly sees from squirrel chewing are:
▪ Gnawed car wiring
▪ Roofs, particularly cedar shake
▪ Wooden fences
▪ Siding
▪ Interior window frames when they end up inside the home
▪ Window air conditioners
▪ Electrical wires
▪ Phone and cable lines
▪ Lawn furniture

Squirrels are found everywhere in the urban environment and anything that can be damaged can be. As with all nuisance wildlife complaints, altering the area to prevent a squirrel from getting into trouble is always the best long-term answer. However, this isn’t always possible or economically feasible. Sometimes the best solution is the removal of the particular animal(s) that is causing the problem. For example, if a squirrel is chewing the wires on your car you can park somewhere else, build a garage or trap and remove it. This type of problem is most easily solved with the squirrel removal service that we provide.

Squirrels on your roof

Squirrels have a spider-like ability to climb walls. They can leap from overhanging tree limbs or those growing close to the building. Phone, cable and electrical service wires serve as a bridge also. If they want to get on your roof, they will. Once squirrels access the upper levels of a structure they can take advantage of the many opportunities that our building methods and materials offer.

Squirrels prefer to live in attics, particularly in the winter, for the protection they provide from weather and predators. They gain entry into the building through attic fans, roof vents, gable vents, soffit vents, gaps left open during construction and the wood and metal housing of prefabricated chimneys. With their ability to chew through most building materials they also create openings. Roofs, gutterlines, soffits, eaves, dormers, ridge vents are some of the areas at risk of being compromised.

Animal Control Specialists, Inc. will perform a comprehensive inspection of your home or building, always set two traps for squirrels, monitor all entry points for activity, return daily to check traps and monitors, recommend long-term animal proofing and install any approved repairs or products as soon as we are confident that all problem squirrels have been removed. As always we will identify the gender of all captured animals to determine if there is the potential of young inside the structure.

The history of a squirrel problem can influence the likelihood of having a re-occurrence of the problem. Squirrels breed twice per year and overwinter in groups. Our average squirrel job in the winter includes five squirrels removed. This is of course is an average which means there could be a couple more or a couple less. Once the female prepares for the birth of her young, she will send the other squirrels packing.

The longer that a problem goes on, the more likely another problem will occur in the future. There are a couple of reasons for this. First of all, longer periods of time that the squirrels are in the attic soiling the insulation with urine and droppings results in more squirrel odors that will attract others. Secondly, our goal is to trap only the squirrels that are currently living in the building. At certain times of year it won’t be all of the ones that have lived there and therefore think of the attic as their den site. If many litters of young have been born in an attic it is what we call a generational problem. Since squirrels can chew into some structures, almost at will, you are more likely to get future infiltrations if a problem is left unattended.

Animal Control Specialists, Inc. recommends solving issues as soon as you are aware of them. Seal up all openings and other areas of potential entry.

Are you hearing scratching in your chimney? Did you have a squirrel in the house?

Chimneys provide an opportunity for squirrels to nest or sometimes a situation that finds them stuck. We see many situations where squirrels will build a nest in the top of a masonry chimney. The squirrel will wedge branches into the tile and create a platform that other nesting material is supported upon. Often this nest will eventually fall down the flue trapping the squirrels at the bottom. While the raccoons are able to climb up and down a flue, squirrels can not. This can lead to squirrels entering the living space of your home, through an open damper or furnace.

Another type of chimney that squirrels find inviting for nesting is the prefabricated chimney with metal or wood housings. The gaps at the top of the housing provide a secure place for nesting. Occasionally a squirrel or more from a litter will fall down the flue contained inside the enclosure. The housings sit over a hole in the roof that opens to the attic so it is also possible they will end up there.

The nests themselves can create a nuisance or worse a dangerous situation. Sometimes their nests will clog up a chimney flue which can be a fire hazard or possible cause of combustion gas asphyxiation to residents.

Not all squirrels in chimneys are directly related to nest building. Sometimes they fall down the flue while presumably investigating the source of the warm air. The result is the same, which is a squirrel either stuck above the damper or in the furnace exhaust duct or ending up in the occupied space of you home.

A squirrel that gets into a house or building will cause a lot of damage to windows trying to chew their way out and to fragile valuables as they climb on shelves, counters and furniture.

Animal Control Specialists, Inc. will remove the problem animals, remove the nesting (or recommend a chimney sweep) if necessary, treat for fleas if warranted and install a professional chimney cap or custom screen.

Don’t wait until squirrels cause thousands of dollars of damage to your home or property.  Contact Animal Control Specialists today for fast, permanent Squirrel Removal.