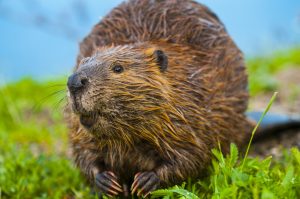 North America’s Largest Rodent
Beaver are the largest members of the rodent family in North America. They are primarily aquatic, spending most of their lives in or very near to water. Along with humans they are one of the few species of animals that have the ability to alter the physical environment to suit their needs. This is achieved by controlling the water level of their home territory by building dams.

Beaver were an important part of the exploration and colonization of America. Their fur was valuable and used as early currency in the form of trade. The unregulated trapping of beaver resulted in their near extinction at the turn of the century. In the 1930’s reintroduction programs were so successful that by 1951 a trapping season was imposed to control the damage that they were causing.

Beavers, like other members of the rodent family, have a set of upper and lower incisors. The beaver’s teeth are like chisels that can chew through a 5 inch diameter tree in about a minute. The trees that are cut down are used for food, dam and lodge construction.

Their large flat tail is used for balance while sitting upright, as a rudder while swimming and as a warning signal. Beavers will slap the surface of the water when they perceive a threat. This acts as a warning to others in the colony. The sound that results is similar to that of a person performing the cannon ball maneuver of entering a pool.

The beaver is a bulky animal with a large, scaly, paddle-shaped tail. Adults typically weigh 40 to 50 pounds, but some may weigh over 90 pounds. The front feet are small with long, sharp, curved toe-nails while the hind feet are large and webbed. The eyes of a beaver are small and dark. The body fur is usually dark brown above and lighter below; the tail is blackish.

Beavers live in streams, rivers, marshes and lakes. They are primarily nocturnal. Every area in the state that has suitable food sources (primarily tree species like maple and willow) located near permanent water is potential beaver habitat. Beaver construct dams out of logs, sticks, rocks, mud and other debris. They are apparently driven to build a dam whenever they sense running water. Usually the location of the dam will be in a creek and built from one shoreline across to the other. As the water level on the upstream side of the dam rises and begins to flow over the top they will increase the height of the dam. Beavers will continue to increase the height and then the width of the dam as water finds a way around it. We have seen dams that stretch for over 100 yards in length and 4 to 7 feet high as they attempt to hold back the flow. This ability to alter their environment is rare in nature. The purpose of controlling the water level is so the entrances to their dens are continuously submerged. This protects them from predators and the deeper water enables them to survive the winter by diving below the frozen surface to get food.

Their lodges are either a dome like structure made out of sticks and mud or burrows dug into the bank of the shoreline. It is very common to find sticks and mud added to the shoreline above a bank den as added protection. Prior to the winter freeze, beavers will create a food cache outside of their lodge in deeper water. They cut fresh branches and anchor them into the mud. This supply is what they will survive on while their access to land is blocked by the ice.

Most of the family’s time is spent above a main dam, but they sometimes add one or more smaller dams downstream to back up water against the base of the main dam. This relieves much of the water pressure that might cause the main dam to rupture. Secondary dams also give them better access to food located downstream. Beavers sometimes dig a system of channels for towing food and construction materials where the water is too shallow to swim comfortably.

A family of beavers is called a colony. Beavers are monogamous and stay with their mate for life, unless one of the pair is removed. Young beavers will remain with the colony until the fall of their second year or will be forced out when the new litter is born at the start of their third year. With an average yearly litter size of 2-4, two years of offspring and the adults, an established beaver colony can have 6-12 individuals.

The presence of beavers in an environment can have many beneficial effects. The result of dam building helps water quality and creates habitat for many other species of wildlife. Water quality is improved down stream from a beaver because silt will settle in the slower moving water on the up stream side of the dam. The water flowing downstream from the dam will therefore be clearer and cleaner. Beavers have also done more to restore wetlands and tame flood-waters than people could ever hope to accomplish.

Wetlands created by beavers are so numerous that their impact on the environment is both widespread and significant. For example, biologists estimate that the population of nesting mallards in southern Ontario grew more than 650 percent from 1951 to 1993, largely due to favorable habitat created by beavers. That’s just one species in one province. Hundreds of species spread across the continent have benefited in a big way from wetland systems built by these buck-toothed engineers.

Wetlands aren’t the only benefit beavers provide. Abandoned dens dug by beavers provide important homes for other wildlife, including river otters, mink and muskrats. Piles of branches that beavers cut and store underwater for a mid-winter snack provide homes for minnows, crappies and other fishes.

Beaver dams store water and slow its velocity. Some of the changes and benefits that accompany this are obvious, others are not.

Streams that rely mostly on rainfall for their water often dry up completely during droughts or even during dry spells. At these times, pools created by beaver dams provide important water holes for fish, wildlife and livestock.

Dams slow the flow of water. This helps to keep stream banks from washing away after a heavy rainfall.

Silt and sediment (tiny particles of soil) washed into a stream by heavy rains tend to settle to the bottom in slow-moving water behind beaver dams. This helps to keep the water clear, allowing sunlight to better penetrate the water and nourish plant life. It also helps to distribute silt and sediment over many small areas rather than having it collect in a few large areas and filling them in.

Dams help to prevent major flooding events by storing water in many small areas and releasing it slowly.

Water that passes through a wetland is purified as plants remove the nutrients found in fertilizers and other human by-products.

Depending on soil characteristics, some water stored in wetlands moves down through the soil to recharge underground aquifers. These underground stores of water are important because many homes and communities tap into them with wells to meet their water needs.

The natural behavior and instincts of the beaver can have negative consequences. Their habits of felling trees and damming the flow of water can result in costly conflicts with people.

Beaver dams commonly cause flooding to many acres of farm fields, rendering them unusable. Many of the situations that Animal Control Specialists, Inc. is contracted to resolve involves the flooding of drainage ditches, retention ponds, culverts and streams. The water level can rise enough to engulf yards and enter below ground areas of homes. Many retention ponds in neighborhoods were designed to handle sudden influxes of rainwater from storms. When beavers block the flow of water from receding the protection from flooding is eliminated because the pond is already at full capacity.

The gathering of materials that beavers require for food and to construct their dams and lodges causes the other major complaint. The strong, chisel-like teeth of a beaver can cut down a 5 inch diameter tree in a minute. We have seen trees as large as 3 feet in diameter that have been downed by beavers. An ornamental tree can cost hundreds of dollars and many have been taken overnight. The risks of larger trees falling on structures, roadways and human pathways is a serious concern for those that request our services.

In rare cases beavers can find themselves in places that require our emergency service. One such call involved a customer that claimed she had a beaver in the basement. Upon arrival we discovered that a beaver had indeed made its way into the basement through the glass of a basement window well. The home was a block from Lake Michigan and must have traveled over land from there.

There are many instances where control of the beavers is the only viable solution.  Contact us for the humane trapping and removal of beavers near your property.