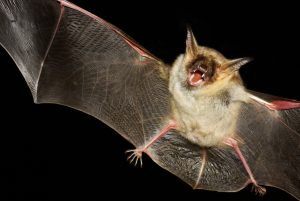 There are many species of bats in Illinois including the Northern Myotis (Myotis septentrionalis), Indiana bat (Myotis sodalist), Red bat (Lasiurus borealis), Hoary bat (Lasiurus cinereus), Silver-haired bat (Lasionycteris noctivagans), Eastern Pipistrelle (Pipistrellus subflavus), and Big Brown bat (Eptesicus fuscus). Of all the bat species in Illinois, the Little Brown bat (Myotis lucifugus) account for the majority of conflicts with humans and will be the focus of the discussion below.

Description: A little brown bat’s body is about 3 – 4 in (80 – 95 mm) long; about the same size as a mouse. As their name suggests, they range in color from light golden brown to a darker olive brown. The bats belly will tend to be lighter than its back. Their wings are leathery and often darker in color than the rest of its body and can have a span of 9 – 10 in (23 – 27 cm). Its ears and nose are generally black and pronounced.

Breeding: Mating takes place in late summer, but the females store the sperm over the winter. Once the female emerges from hibernation, gestation begins and a single pup is born 60 days later. Females group together and form large maternity colonies to give birth. Up to 300 bats can be part of one maternity colony in a structure. Females will return to the same maternity colony site each year if it is available. Bats are surprising long lived animals, some little brown bats have lived more than 30 years in captivity.

Young: Little brown bats are born hairless, blind and with their ears folded over their head. They grow quickly and are ready to fly and hunt on their own in 3 – 4 weeks after birth. Nursing mother bats will have to consume more insects each night in order to produce enough milk for its growing pup. An 8 gram nursing female will consume 10 grams of insects each night.

Special Considerations: Bats, like all mammals, can contract rabies from other animals and are capable of transmitting the disease to other mammals or humans. Piles of their droppings can contain histoplasmosis spores. This can pose a health hazard to people when the droppings dry and the dust becomes air born.

Little brown bats are insectivorous, one bat can consume thousands of mosquito sized insects each night. Like most bats, they are nocturnal. The little brown bat is commonly seen outside flying over water during the 2nd and 3rd hours after sundown. Bats are commonly seen flying around pools or close to outdoor lights because both situations attract the bats prey. Seeing bats flying outside your home is not uncommon and is not necessarily an indication that they are living in structures on your property.

They have the ability to use echolocation to find their food. Bats will emit high frequency clicks and chips. The sound waves will bounce off of its prey and back to the bats ears. The bats use echolocation like sonar to zero in on their prey while on the wing. The bat prefers feeding over water where its insect prey density is the highest. They roast during the day under loose bark of trees, in caves, abandoned buildings, and attics.

Little brown bats migrate to southern Illinois in the fall to hibernate in caves or abandoned wells. They begin migrating to their winter roosts when the frost begins to kill off its insect prey. While hibernating, the bats loose much of the weight that they built up the previous year. They emerge from hibernation in the spring once the insects emerge, usually in April. During the warmer parts of the year, males are solitary and females will form maternity colonies.