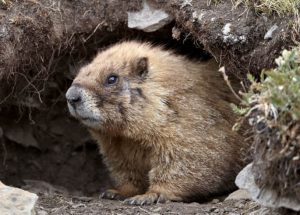 When they dig a burrow it looks like someone dumped a wheelbarrow of debris.

Groundhogs (aka woodchucks) are rodents and members of the squirrel family. They share some of the same traits with their more familiar squirrel cousins, like a large pair of yellowish incisors, a tendency to gnaw and the ability to climb trees. The groundhog’s body is rotund and its short legs are well adapted to digging. Their fur ranges in color from yellowish to reddish brown, they also have short rounded ears and a tail that is about ¼ as long as their body. Groundhogs are around 1 foot (60 cm) in length and weigh between 5 and 11 pounds (2 – 5 kg).
Biology:

Breeding: Groundhogs become sexually mature after their first year. After awakening from hibernation in March or April, males will emerge and fight with one another to establish dominance. Females will mate when they emerge about 2 weeks after the males.

Young: Litter sizes of the groundhog range from 2 – 5 and are born in April or May; about 32 days after mating. Newborn groundhogs are naked until they are 2 weeks old and open their eyes at about 4 weeks of age. They are weaned at the end of 6 weeks. Most young will disperse quickly form their birth den after they are weaned. They will not grow to adult size until their second year.

Groundhogs are active during the day and eat a wide array of plants. In addition to grasses, wildflowers, and clovers, groundhogs will also eat several types of cultivated crops such as carrots, beans, celery, corn and soybeans. Individuals emerging early from hibernation will eat the bark, buds, and twigs of trees. Groundhogs dig subterranean dens into the side of a hill, embankment or under structures. The opening of the den is usually about 10 -12 inches (25 – 30 cm) in diameter and the tunnel can extend up to 30 feet (9 m). The den will contain an enlarged nest chamber where the groundhog will hibernate and raise young.

Unlike other squirrels in Illinois, groundhogs are true hibernators. They will put on extra body fat in late summer and fall before entering hibernation around October. While in hibernation their heartbeat will slow to 4 beats per minute, their body temperature will hover around 40°F and will breathe once every 6 minutes. When the groundhogs emerge from hibernation in March or April, they will have lost 30% of their body mass.

Groundhogs have several natural predators such as coyotes, foxes, owls, hawks, and domestic dogs. Humans can have an impact on groundhog populations as well, many groundhogs are hit by cars each year and they are pursued by hunters. As with most species, the impact humans have on the overall population of woodchucks is minimal when compared to the effects of predation and disease. According to some research, 77% of the young will not survive their first year and 30% of the adults will die annually.

Groundhogs become a nuisance when they begin to damage crop fields or gardens. They have been known to damage fruit and ornamental trees by gnawing and scratching. Their dens can pose a hazard to equipment or livestock and their dens are often reused by other species such as raccoons, skunks, coyotes, and opossums. Their dens can also weaken embankments and can structurally weaken foundations if they dig under buildings.

The best way to prevent damage to gardens or trees is to place fences around areas that are susceptible to groundhog damage or entry. The fence should be about 3 feet (1 m) high and should have an additional 10 – 12 inches (25 – 30 cm) below ground level to prevent burrowing. Groundhogs are expert climbers so the top 15 inches (38 cm) of fencing should be bent outward at a 45° angle. Electrical fencing is also effective in preventing groundhogs from reaching vulnerable gardens or trees. An electrified wire strung around the area about 4 -5 inches (10 – 12 cm) off the ground and a second wire about 8 – 9 inches (20 – 23 cm) from the ground will exclude groundhogs.

In urban settings, the best method for removing nuisance groundhogs is to capture the animal using box traps or foot hold traps. Trapping groundhogs can be challenging and time consuming. It is sometimes very difficult to lure a groundhog into box traps using bait because the animal has abundant food sources that aren’t surrounded by metal boxes. Fortunately, for homeowners, the population density of Groundhogs in our service territory is not very abundant. This fact means it is unlikely that many individuals will need to be captured in order to solve the problem. Another benefit to the trapping and removal of a diurnal (daytime active) animal is that they can be targeted exclusively, with the cooperation of our customers, by closing the trap at night.

In some situations, lethal fumigants can be used in groundhog dens. Groundhog fumigants are usually in the form of a gas cartridge with an ignitable fuse that produce lethal gasses like carbon monoxide. The entrances to the den must be located and plugged with soil. The gas cartridges are then ignited and are put into the den before the last entrance is sealed. Groundhogs inside the den die from the gases and chemicals release from the cartridge and should be removed from the den to prevent the carcass from decaying underground and attracting other nuisance wildlife.

If you see Groundhogs near your property don’t hesitate to contact Animal Control Specialists!