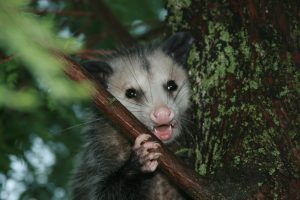 Do you have opossums under your house, deck, or in your crawl space?

Opossum removal is a common service we provide.  We occasionally get calls from clients stating “I see a big rat under my bird feeder!” In most cases, the animal is actually an Opossum.  Possums range in length from 22 – 33 inches (65 – 85 cm); they are about the size of a house cat. They have an elongated head that comes to a point at its pink nose. Opossums’ fur is grayish to white in color and their ears are black and hairless. Their tails are hairless and are scaly in appearance and texture. The opossum can use its tail to steady itself on branches, to hang from branches or to carry leaves or grass to its den. Both its front and rear feet have an opposable thumb which allows the opossum to grip objects with any foot. An adult opossum will have 50 teeth, more than any other mammal species in North America. Opossums are also Illinois’ only marsupial mammal.
Biology:

Breeding: Females can breed when they are 8 months old and will breed the year following their birth. Opossums mate in mid – late winter and gestation only takes 13 days. Females can have up to 2 litters per year, the first is born in March and the second litter arrives in late June or July.

Young: Litter sizes average 7 – 9 young, but litters have been known to be as large as 20. When the young are born they are very poorly developed, they are blind, hairless and helpless. Immediately after birth, the newborns will make there way into the mother’s pouch where they will stay for another 2 months. While in the pouch the young opossums will continuously nurse. Females only have 13 nipples; young that are not able to secure themselves to a nipple will die shortly after birth. Young opossums will never be left in a den unattended since they will always be with the female. Once they begin to venture from the mother’s pouch, they will ride on her back for another month as she forages for food or den sites. Three months after being born, the young opossums will be ready to be on their own.

The most notable difference between opossums and other mammals found in Illinois is how the young develop. Marsupial mammals give birth to their young after a very short gestation time. The young are born completely helpless and will instinctively enter the female’s pouch immediately after birth and continue to grow. After a period of time in the female’s pouch, the young will emerge and begin to venture out on their own. The young will still return to the pouch and nurse until it is weaned.

Opossums are solitary, nocturnal animals. They are not territorial, but are wanderers. They will typically choose new den sites every couple of days. An abandoned groundhog den, hollow tree, culvert or a brush pile will all make good dens for opossums. Their tails and opposable toes on their front and hind legs make opossum expert climbers and they search trees for food or dens. Opossums will eat both plants and animals. Earthworms, frogs, insects, bird eggs, nesting birds, garbage, road kill, and dog food make up most of the opossums’ diet in urban settings. They will also eat berries, mushrooms, nuts and seeds as these foods become available to them through out the year.

Opossums have a short life expectancy in the wild, the typical life span is 2 years but some individuals live as long as 7 years. Many are killed on the road by cars and many will freeze during harsh winters. Coyotes, foxes, hawks, owls, domestic dogs and humans are the main predators of opossums.

When startled or confronted by a predator, the opossum will play dead. It will lay on its side with its eyes and mouth open. It will bear its teeth, drool and will not respond when touched. Opossums can play dead for several minutes to 6 hours. Although this type of defensive posture may not seem like a typical response an animal will have when threatened, it can confuse or scare predators allowing the opossum to escape. Sometimes opossums will take a more aggressive stance when threatened. It will open its mouth wide exposing all 50 teeth, hiss, screech, salivate and excrete a smelly green substance from its anal gland. This behavior is more common with males.

Opossums become a nuisance when they disturb garbage cans, eat food left outside for pets or birds, den under a person’s house or disturb other preferred wildlife such as bird nests or houses. There are several methods to discourage opossums from becoming a nuisance. Compost piles should be fenced or transferred to a composting container. Pet food or bird seed should not be left outside overnight and garbage cans should be secured to prevent opossums and other animals from opening the cans or tipping them over. Old subterranean dens dug by skunks or woodchucks should be filled or the entrances should be plugged to prevent opossums and other animals from occupying the den. Entrances that could be used by opossums to get under homes should be sealed as soon as the nuisance animals have been removed from the structure. Animal Control Specialists, Inc. installs buried screens to protect your home from burrowing animals.

Opossums will reside in the same dens frequented by skunks. It is very common to catch an opossum in a trap set at burrow that smells like skunks. In those situations we assume that the opossum won the battle for the right to stay. We have also removed opossums and raccoons from the same attic. It is not common to find them in attics, but it does occur. When they have gained access to an attic there is almost always a tree branch laying on the roof. Our professional animal proofing will protect your attic from uninvited guests.

Opossums are the most common dead animal that we remove from under decks, stoops and sheds. Apparently they either like to crawl into dark, tight places to die or many perish in their sleep.

There are no known toxicants, repellents, or fumigants that can be used to remove nuisance opossums. The best methods for removing nuisance opossums are to capture the animal using box traps or foot hold traps. Opossums forage for food by their sense of smell, baits can be effectively used to lure opossums into box traps. Opossums will also fall into window wells or may be found in stair wells that lead to basement doors. They are normally not aggressive. If they are left alone, they will leave if there are is little or no food available to them. Keep curious children and pets away from opossums, people and pets can be bitten by opossums if they get to close or try to grab the animal. Opossums can carry rabies and it can be difficult to determine if an individual is infected since the opossum’s defensive behaviors can easily be confused with the symptoms of rabies.