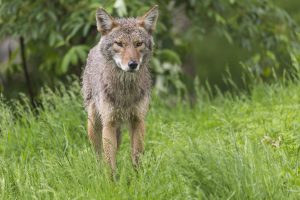 They are survivors and their population density is greater in the urban environment.

Coyotes are members of the canine family and therefore have a dog-like appearance. Their color can very from dark to gray, yellow or reddish. Their tails droop downward from the height of their back and it gets tucked between their legs when they run. Coyotes will not lift and wag their tails like domestic dogs. The overall length including tail is 44”-54”.

Weight: The average size of coyotes is 20-50lbs. Males tend to be larger than females.

Breeding: Females may breed in their first year, but most mature in their second year. Mating reaches its peak in late February and early March. The gestation period is 63 days. Coyotes will occasionally mate with domestic dogs resulting in coydogs. Since this mating will generally occur in the fall, the survival rate of these offspring is usually low. The young of these litters are born when food is scarce and dogs don’t aid the female coyote in hunting and caring for the pups.

Young: Litter size ranges from 2-19 pups with an average of 4-9. Young are born in April or May. Their eyes open at 9-14 days old. They will remain in the den for 21 days and will not venture far from the den until 5 or 6 weeks of age. At 8-12 weeks of age the pups begin to hunt for themselves and the family will leave the den at about this time. Both parents help care for the young, especially after they weaned from milk. The family usually breaks up in late summer or early fall. The young must then find their own territory and have been known to travel 120 miles in their search.

Coyotes are chiefly nocturnal, but may be abroad at any time of day. They are omnivorous which means they will eat animal and vegetable matter, or in other words, just about anything. Small rodents, mice, voles, rabbits, etc. are their main source of food. They will sometimes hunt in pairs or occasionally in larger groups called packs. Their territory can be quite large, 20-30 miles in diameter, and is generally determined by the availability of food. Coyotes have a social order with dominant and subordinate individuals within the pack. They are very adaptable and thrive in all types of terrain and climate. Communication between individuals is accomplished with a variety of yips, barks and howls. They also mark their territories with urine, feces, and gland secretions.

Coyotes do more good than harm. They help to keep rodent populations in check. They also aid in the natural cycle of life by eating carrion. However there are times when an individual or group of coyotes develops habits that conflict with humans. For these situations targeting and removing these individuals can be very effective. Trapping of canines, coyote and fox, requires more specialized skills and equipment than any other indigenous wildlife that we handle. They are cautious, intelligent and learn quickly. Combined with the fact that they travel such a large territory, these factors make their capture always a challenge.

The number of sightings and complaint calls regarding coyotes has increased each year. Reasons for this can be an increase in the coyote population, the sprawl of human population into their territories and the loss of their natural fear of humans. Probably all are at least a part of the change in frequency of encounters. Generally coyotes do not pose a physical threat to people. There are very few reports of attacks on humans, 16 in North America during a 30 year period. (According to the Illinois Department of Natural Resources) They become a nuisance, in an urban setting, when they choose to den under a shed, deck, or in close proximity to homes. Mainly the remains of their prey scattered around and the possible infestation of fleas cause the most common annoyances. The coyotes necessary need to kill results in the most serious complaints. Depredation upon livestock is very costly to ranchers in rural areas. In urban neighborhoods cats and small dogs can become their prey of choice. Coyotes are opportunistic and pets don’t have the fear and instincts to avoid a lethal attack. These occurrences are what most people are concerned about and will likely be what precipitates requests for trapping. It is believed that once coyotes develop a taste for a specific meal, such as lamb, it virtually impossible to discourage them from killing sheep. It is therefore likely the same is true of coyotes that discover the ease of dieting on cats and dogs.

If you live in area with a resident population of coyotes some precautions will help reduce the incidence of conflicts. First of all, don’t provide food to them. This will bring them closer to your home, reduce their fear of people and can result in higher birth rates. As a general rule, do not feed any wildlife. Keep pet foods inaccessible, garbage cans secure, compost bins protected and minimize bird feed on the ground if you must put it out in the first place. Secondly, make it as difficult for coyotes to hide close to your yard. Trimming tall grasses, for example, can reduce their ability to stalk your pets. Although not guaranteed, a fence can be a deterrent also. Additionally, do not leave small dogs and cats unattended if the risk of attack exists. It is also recommended that very young children are also not left alone. This of course is common sense and a minimal requirement of responsible parenting.