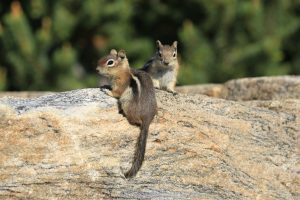 They are cute until they invade your home.

Chipmunks are rodents and members of the squirrel family (Sciuridae). They are 8 – 11 inches (20 – 28 cm) in total length, their tails

make up 2.5 – 4.4 inches (6.3 – 11 cm) of their total length. The backs of chipmunks are grayish brown to red in color and their bellies are white. They have 5 dark stripes that run down their backs and sides with the widest stripe being in the middle, there are white areas between the pairs of dark stripes.
Biology:

▪ Weight: Adult chipmunks weigh between 2.3 and 4.1 ounces (66 – 115 g) and newborns weigh 0.1 ounces (3 g).
▪ Breeding: Most young breed the spring following their birth. Once mated, gestation lasts around 31 days and females have 2 litters a year.
▪ Young: Litter sizes average 2 – 5 young and are born blind and hairless in an underground burrow. The first litter arrives in April or May and the second litter is born in August or September. The young are weaned after about 40 days. They appear above ground after they are 4 – 6 weeks old and will move away from their birth burrow when they are 6 – 8 weeks old.
Habits:

Chipmunks are active during the day and will stay close to their burrows to defend it and their foraging territory from other chipmunks. They are solitary squirrels except for during courtship or when raising young. They are capable to climb trees and bushes but spend most of their time on the ground. They dig subterranean burrows up to 30 feet (10 m) long up to 3 feet (1 m) below the ground. The entrance is about 2 inches (5 cm) wide and will typically not have a mound of excavated dirt near the entrance. The burrow will contain a den and storage chambers.

Chipmunk’s diet is mostly composed of fruits, nuts and seed. They will supplement their diet with bird eggs, insects, slugs and mushrooms when these items are available to them. They have large check pouches that they use to transport dry food back to their burrow for storage. When their pouches are filled, they are bigger than the chipmunk’s head. Chipmunks will store food in their burrows year round, it is common to see them taking food to their den.

Their small body size does not allow the chipmunk to hibernate during the winter. They will enter a semi-hibernation state called torpor for several days at a time. Torpor is similar to hibernation in that their body temperature will lower and their heartbeat, breathing and metabolism will slow down. They will stay in this state for several days, but the chipmunk must awaken every couple of days to eat. During the winter they will stay in their dens and live off of the food they stored during the warmer parts of the year. During mild winter days, they will sometimes forage above ground.

Chipmunks become a nuisance when they dig dens under people houses or fences and when they raid gardens for food for the winter. They will consume flower bulbs, bird seed and pet food that is not stored in a rodent proof container. Chipmunks tend to dig under foundation in areas where bushes grow next to buildings. They best method to prevent chipmunks from digging under buildings is to bury fencing at least 1 foot underground with another 6 inches of fencing buried perpendicular to the foundation. To protect gardens, fencing should be set up around it and buried 1 foot below the surface with 6 inches of additional buried fencing running perpendicular to the above ground fence. This will prevent chipmunks from digging below the fence and gaining access to the garden. To discourage chipmunks from burrowing near structures, bird feeders should be placed at least 15 – 30 feet (5 – 10 m) feet away from structures so that spilled birdseed does not attract chipmunks to the structure.

There are no toxicants or repellents that are effective on chipmunks. There are fumigants to kill chipmunks in their burrows, but it is generally ineffective because it is difficult to locate all of the entrances to the burrows and using the fumigants under building is not recommended. The best method to remove nuisance chipmunks are to trap them using baited box traps or body grip traps. Large rat traps can be effective in some situations. After the nuisance chipmunk has been removed, entrances to the structure that have been used by the chipmunk should be sealed to prevent other chipmunks from moving into the vacant burrow. Most entrances to a building that are used by chipmunks will be along the ground, usually a hole in the foundation of the building. Occasionally, chipmunks will enter a house through access points along gutter lines or on roofs through uncapped chimneys, furnace flues or attic vents.

Trapping of chipmunks requires an ongoing maintenance program to maintain a close to zero population. Chipmunks are one of the few exceptions of the permit requirement to trap. Relocation is still not allowed without a land or site owners permission. Our trapping and removal service is very effective when there is a specific area to repair or animal proof once the residents are removed. Population dynamics dictate that when individuals are removed the territory will be taken over by chipmunks from adjacent properties.