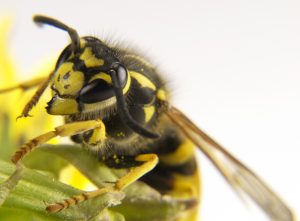 Yellow jackets (Vespula spp.) are a social insect that lives in colonies. They are the smallest of the common vespids at about 1/2 inch long. These are the “bees” that can make eating outdoors an unpleasant experience. Their nests are constructed of paper-like material made of chewed wood fibers and salivary secretions. Most species build their nests underground. The workers will enter and exit the nest from a tunnel at the surface. Underground nests are often started in abandoned mammal burrows or similar cavity. Such as hollow concrete blocks and voids under rail road ties. The nest is expanded initially to fill the cavity, and then the cavity is enlarged as the colony develops. Yellow jackets will remove material from the walls of the cavity and carry the stones, earth or drywall outside of the opening.  This can make Yellow Jacket Wasp Removal extremely challenging for the homeowner.

The species that commonly nests in structures is the German yellow jacket (Vespula germanica). Apparently introduced from Europe, they are often found nesting in wall voids, attics or crawl spaces. They will use any available hole or crack in the exterior of the structure as an entry point. Their habit of enlarging the size of the cavity to accommodate the growing nest results in holes being chewed in drywall ceilings and walls. Once this occurs many hundreds of wasps will enter the living space of the home, where they will generally fly to nearest, brightest window. If you hear popping noises in a wall and see a developing wet spot, do not poke at it! We get many emergency calls to handle the sudden invasion of yellow jackets as the season progresses.

As the season nears its end, usually in September, the queen will lay many eggs that will hatch into additional queens. These new queens will leave the nest and search for a protected place to overwinter. Each queen that survives will begin a new nest in the spring. All of the workers die off at the end of season. This time of year poses the greatest challenge to solve a yellow jacket problem. If wasps are getting into the living space of your home and they are the larger queens in early fall, it can be very difficult to stop. Since the queens migrate away from the nest after hatching, treatment of the nest site won’t kill any that have already ventured away. They can be in ceilings, walls, under insulation and in crawlspaces and will be lured to any light source they see. Recessed or canned lighting are common pathways for them to get into the house. With that said, it is still best to get the site of the nest treated as soon as possible to stop the additional hatchlings from becoming a bigger issue.

Yellow Jacket workers can be somewhat unpredictable in their response to humans or pets that approach their nest. According to the UK College of Agriculture, Food and Environment – “Yellowjackets are arguably the most dangerous stinging insects in the United States.”  Often, a person approaching a nest will be completely ignored, but sometimes a person just walking nearby will attacked and stung. Many experts consider yellow Jackets to be the most dangerous of the social wasps.

Yellow Jacket Wasps can be dangerous and the nest will only get bigger. Call to have one of our specialists locate and remove yellow jacket wasps from your property.