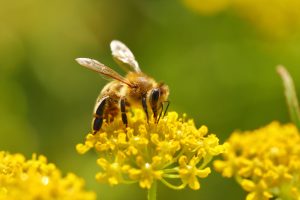 Social behavior is highly evolved in the honey bee (Apis mellifera Linnaeus). A colony consists of workers (sterile females), which are about 2/3 inches long, queens (only one lays eggs in each colony), and drones (males). An individual colony may contain 20,000 to 50,000 bees. In addition to feeding the larvae, workers also amass reserve supplies of honey, which can be used by all the members of the colony during periods of adverse conditions. Honey bee colonies survive the winter while subsisting on the stored honey in the hive. They do not need to reestablish colonies annually.

A hive consists of many cells made of wax. The workers create the masses of cells which are called combs. Some of the cells house immature bees (eggs, larvae and pupae) and others serve as storage sites for the honey. The temperature of hive is regulated by the activity of colony members. If the temperature gets too hot the honey and wax will melt.

Honey bees are very valuable as pollinators. Their numbers have been hurt by parasites, disease and pesticides. The rental of hives has become very common as the number of native colonies has declined. Property tax incentives have been offered in some locales for having boxed hives on your property. For these reasons it is very important to handle honey bee problems in a responsible way.

Occasionally a colony will split and create what is called a swarm. The colony’s queen will create another queen. This new queen will become the egg layer for the colony and the original queen will leave the colony with approximately half of the colony members. The swarm will then search for a suitable site to create a new hive. These swarms will look like a cloud and then land on an object as a large mass while scouts hunt for a new location to call home. We get many calls each year for these swarms of bees that can contain 20,000 or more bees. Swarms do not need to be treated since they will usually move on once a hive location is selected. It is possible to have a swarm captured alive by a bee keeper. As long as they don’t decide to move into a void in your home we recommend being patient, avoid the area and allow them to go on their way.

When honey bees establish a hive within a structure it can create a serious issue. Bees can find their way into the living space of the home. The presence of honey in walls and ceilings can cause damage and attract various other insects and mammals. Melting honey will saturate plaster, drywall and wood. This will occur if the bees die, usually when someone treats the area with pesticides. Flies, ants, beetles, moths, roaches, mice and raccoons are just some of the invaders that are attracted to honey. When a honey bee hive needs to be treated it is imperative that the entire hive is removed from within the structure. This almost always requires opening up part of the structure to gain access to the location. After treating the bees, the area is opened up, all of the combs and honey need to be scraped out and then the area needs to repaired and sealed. If the hive is left behind, bees from other colonies will come and “rob” the honey for their hive. This pesticide treated honey can cause a chain reaction where hives will perish do to the transfer of the poisoned honey. Without the presence of the bees tending to the combs the hive will melt causing stains and attracting the previously mentioned invaders.

Animal Control Specialists, Inc. has the expertise to handle honey bee problems in the proper way. We will treat and completely remove the hive.We will make every attempt to return the structure to its original condition, within our skill set of ability. If you have a honey bee hive that needs to be removed, our only requirement is that you accept that the hive needs to be accessed regardless of where it is located. We have removed hundreds of pounds of honey comb from ceilings, walls, soffits, attics and within the walls of brick chimneys.

This is not the job to do yourself.  Contact us today for Honey Bee Removal.